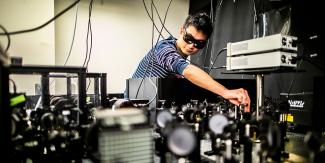 The University of Pennsylvania Department of  Physics and Astronomy combines world-leading science with the intimate faculty-student community unique to small departments. We are among the smallest of all Physics and Astronomy Departments of the top 25, but we have labs and facilities comparable to some national laboratories, and we often top the list of most highly-cited research. We have three broad areas of research: Condensed Matter Physics, which includes experimental and theoretical work in hard condensed matter, quantum materials, soft condensed matter, biophysics, and living matter; Astronomy, which at Penn includes experimental theoretical and experimental astronomy, dark energy and dark matter, galactic observations and modeling, and extrasolar planet searches; and Particle Physics, which on the experimental side includes higgs and SUSY searches at ATLAS, and low- and high-energy neutrino physics with experiments like SNO+, T2K, and DUNE, and on the theoretical side includes string theory and phenomenology, broad and deep explorations of field theory, and implications for cosmology.

Our graduate students typically focus their first year of study on graduate-level coursework and becoming acquainted with the Department’s research groups. Starting research with a group in a student’s first year, and in particular the summer before their first year, is strongly encouraged. Students need not stay with the group they start with, but can move between groups if they find their interests have changed. In their second year, students join a group and begin their own original research in direct collaboration with faculty and postdocs; each of whom are leaders and pioneers in their respective fields.

Doctoral degree requirements can be found here, but in essence include three or four semesters of coursework, an oral candidacy exam based on a piece of independent research typically taken in Year 3, and a formal written dissertation based on unique, original research contributions to physics, defended in a final oral exam.

GAPSA strives to enhance the Penn graduate student experience through a diversified array of initiatives with an emphasis on promoting interdisciplinary research and bringing students from different disciplines together.